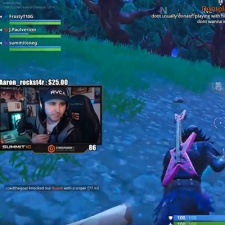 The Twitch community’s dislike of the Brothers Paul is escalating.

Popular streamer Summit1g faced some tough treatment at the hands of his followers over the weekend after playing Fortnite alongside Jake Paul.

Kotaku reports that the stream itself was largely uneventful but was punctuated by some really quite negative and at times brutal chat.

In fact, things got so bad that Summit even turned on his posse, stating: “I’m a little disappointed in the chat, to be honest with you. I thought the 1g squad was a little bit different. Thought some people had a little bit thicker skin.”

He then replied to others who threatened to unfollow by saying: “Sounds like playing with him was worth it then. Helped take out the trash.” His tirade even spilled out onto Twitter, although he eventually seemed to back down asking for a truce from his fans and pleading that they “normal stream tomorrow, don’t let my channel die more”.

The response from the wider Twitch community was mixed, as it has been for weeks. Fellow streamer Sodapoppin observed that streaming with either of the Pauls seems like a bad decision at this moment in time.

“If they asked me to play games. I would say yes, but only under the condition [that] I can say whatever the f*** I want to him,” he said. “If I play with Logan Paul, I’m going to make a joke about him in the fucking forest, and he better not get mad. Is there actually any benefit business-wise?”

xQc, who lest we forget is no stranger to controversy himself, commented that any streamer who invites the Paul audience into their streams is asking for trouble, warning that “your entire environment in the channel becomes garbage.”

Destiny, meanwhile, downplayed the community’s negative reaction to the brothers and described Sodapoppin’s comments as “dumb”, while streamer Clint Stevens said that most people would be well advised to try and grab some of the new audience the Jakes are bringing to Twitch.