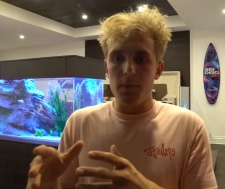 Things are looking grim for Jake Paul and his influence posse Team 10. However, it's not the young vlogger causing rifts, but his father, Greg.

YouTuber Keemstar released a video last week stating that an 'inside source' revealed Greg Paul has now taken control of both Jake and Logan Paul's businesses, and is planning to merge the two brands together.

According to the source, dad Paul did an audit on both of his son's brands, and subsequently made the decision to let a number of people go from Team 10.

While Greg Paul's new direction appears to have caused friction within Team 10, Jake seems to be outwardly positive about the whole affair. The Paul brother expresses that he's pleased to have older advisers on board to handle his business.

"As I was bringing on older business advisers and people to help me with my company, a couple of them advised me to bring someone on into my corner who wholeheartedly wanted nothing else to protect me, didn't care about my money, who I could 100 per cent trust no matter what," Jake states in his recent video.

"The only person that is right for that job, is my dad. Not to run my business but simply look over the shoulders of other people who were in my businesses who I’m entrusting to run my business, because I knew my dad would have my best interest at heart."