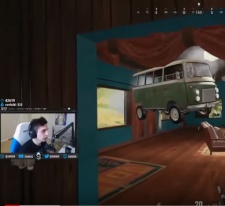 One of PlayerUnknown’s Battlegrounds’ biggest Twitch broadcasters, Michael ‘Shroud’ Grzesiek has been banned from the game for a month after teaming up with a hacker in game.

PUBG has very strict rules when it comes to teaming in solo games and it’s obviously stated as a bannable offence. The hacker in question was seen on the stream flying around in a vehicle and through the building Shroud was situated in.

Wadu, a regular stream sniper and fellow Twitch streamer, was also in the area at the time. They both proceeded to get into the car with the hacker, who also used a wallhack which helped Shroud to get a kill.

At the the time of this happening, Shroud was well aware that this is a bannable offence and he knew he was going to be banned before long.

“It seemed like a great idea, but it wasn’t a great idea,” he said following the ban. He fully has accepted the punishment as he was well aware of the consequences of what he was doing.

This isn’t the first time the streamer has been banned from the game, he was previously banned in September, 2017 after teaming with a stream sniper who goes by the name of Banana Man, this ban was only three days long, compared to the month long ban that has been implemented this time around.

This ban came just days before the streamer is due to participate in an Amazon Prime Day event featuring other streamers, such as DrDisRespect, Anthony Kongphan and DeadMau5.