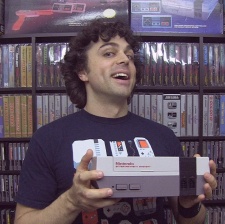 Contri's newest project is a new book based on the Super Nintendo Entertainment System titled 'Ultimate Nintendo: Guide to the SNES'.

The goal for the project was originally set at $15,000, where fans could pledge at different tiers and receive rewards, which ranged from digital and hard copies of the book to their name listed in the beginning or end credits.

However, positive response from gaming fans has seen the fundraiser accumulate over $60,000 as of the time of this writing, with around 23 days left to go.

Contri took to his Twitter to express his excitement for reaching the milestone while continuing to promote the project over his social media and YouTube channel. He also released an update on Kickstarter, thanking fans and pledgers for their support.

Thank you all for your overwhelming support! I think I may have underestimated how much everyone loves the SNES!" Contri wrote on Kickstarter.

"As we move forward in the campaign, I wanted to let everyone know about the FAQ, where I'm attempting to answer certain questions raised regarding shipping, book cover differences, etc. The FAQ will be updated as needed."

Contri content has garnered a large following over the years covering classic video games on the Nintendo Entertainment System (NES) and collaborating with various other popular YouTube personalities. Alongside his content, Pat has also published a book titled “Ultimate Nintendo: A Guide to the NES Library” that compiles and reviews every game released for the system.

Over on the Kickstarter page, the SNES book is listed to have contributions from other popular gaming personalities, including the James Rolfe (Angry Video Game Nerd), Norm Caruso (Gaming Hisotrian), Kelsey Lewin, and many others.

Ninja announces debut book on how to be good at games

Kickstarter launches Drip: A new subscription based platform for creators