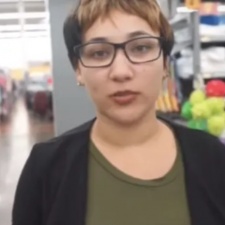 YouTuber Lauren Love, who runs several channels on the platform with her partner Joel Ashley, is receiving criticism for a prank she set up on unsuspecting Walmart employees.

Their main channel, Lauren and Ashley TV has over 1.3 million subscribers. This week, they posted a video where Love posed as a high-level Walmart employee and proceeded to tell the store's staff they had been fired.

Both creators have very large followings on social media and have done other prank style videos on their channels in the past. In the video of the prank at the Walmart, Love dressed up in business attire and walked up to multiple store employees, telling them she is in a management position and proceeds to tell them they’re fired.

In the video, Lauren is quoted as saying to one employee: “I'll have to take your badge and your jacket from you; you're fired,”. The video has since been removed from the channel.

One employee from the store, Maria Leones, spoke out to local news reporters about the prank.

"Really, I was really so crushed. I felt so little, I felt so powerless,” she told news station told KTRK-TV.

“At that very moment, I felt so little, because back home I had a very good reputation because I’m a professor.”

When contacted by BuzzFeed news, Love and Ashley didn’t respond to requests for comment. However, Love reportedly told KTRK that she "felt bad" for upsetting Leones and proceeded to offer her $50 as an apology.

The reaction online from viewers was harsh, criticising both creators for their actions. Walmart didn’t respond to requests for comment, but put out a statement about the prank.

“We’ve taken actions on behalf of our associates, including asking YouTube to remove the video and calling their attention to the bullying nature of this hoax," the spokesperson said.

"Our associates work hard every day to serve our customers. They do a fantastic job, deserve better than being subjected to such disrespect, and will continue to have our full support.”