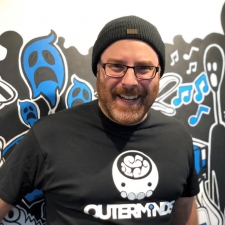 Whenever a successful YouTuber does something that isn’t YouTube, the criticism rolls in thick and fast.

Whatever they’ve made is quite often dubbed as a ‘cash cow’ for creators to make a quick buck off a poor product, be that merchandise, a book or in this case, a video game.

Outerminds is no exception to this. The Montreal-based games developer just released Ball Rider, a mobile game made in collaboration with YouTubers Ethan and Hila Klein. The company is also known for making Tuber Simulator and Legend of the Brofist, two games pertaining to PewDiePie.

The internet instantly lunged for the free-to-play mobile title, calling it a cash grab and accusing the Kleins of simply slapping their IP on to a poorly made game.

However, the Outerminds team assures us this isn’t the case. We chatted to Outerminds co-founder Guiz de Pessemier to discuss the development of Ball Rider and the work that goes into these games to ensure that they’re anything but a minimal effort influencer cash cow.

Ball Rider had been in development for a year and a half prior to its release. Outerminds' team of 25 were working on it alongside upkeep for Tuber Simulator.

Ethan Klein put out a tweet last February saying that H3H3 was on the hunt for a developer. Outerminds were a great fit; they were familiar with influencer relations and came highly recommended by Kjellberg.

“They [Ethan and Hila] were both very involved with the design of Ball Rider, especially with the little details,” de Pessemier tells us.

“Towards the end, they paid real attention to make sure the microtransactions weren't aggressive. They also wanted to make sure that their IP was well represented and they wanted to be proud of the game.

“During the initial design process, we tried lots of concepts together. We had a game jam internally where we split the Outerminds team into three or four separate groups to make some different prototypes which all contributed to the design of the final product.”

Outerminds’ first influencer collaboration was PewDiePie: Legend of the Brofist, a 2D platforming game with the Felix ‘PewDiePie’ Kjellberg as the protagonist. Back in 2016, the company only consisted of six people.

“It kind of happened by accident," says de Pessemier.

"There was a game jam on gamejolt.com and PewDiePie was involved with it. We made a game there and Felix got in touch with us and asked if we could make the same game for him but bigger and better.

“That was our first relation with influencers, we loved it and we loved working with Felix. We've now built the expertise needed to work with YouTubers and influencers, so we thought let’s do it again. Let’s handpick someone we like and not just make a game for anyone.

"We had a lot of offers that we declined, not necessarily because we didn't like the IP, but because we wanted to work with someone we're fans of.

"I am a YouTuber myself, nothing compared to the likes of PewDiePie and H3H3, but I've just hit 100k subs. This is why I'm kind of used to dealing with YouTubers and feel like I how to work with them and make sure their IP is represented.”

Outerminds was quick to notice the criticism that came from releasing a game with a big influencer. Ethan and Hila released the announcement video for Ball Rider in the middle of a three month-break from YouTube, which led fans to assume that the game was just a cash grab attempt to recoup money lost from not making YouTube content.

I don't think anyone complaining about the monetisation has actually played the game.

“None of our games have advertisements that will stop you playing. We only use rewarded ads which means you can watch it on purpose and then earn something.

“The microtransactions aren't aggressive and I don't think anyone complaining about the monetisation has actually played the game.”

Outerminds’ games are designed to be enjoyable for a long time. And while they may be produced alongside or in collaboration with a YouTuber, players don’t need to like the YouTuber to enjoy the game.

“We've never made a game as a cash grab, they're all games on their own. They're not just there to be played for a week and then disappear, we want people to enjoy them over a long time,” de Pessemier assures us.

“In Tuber Simulator for example, if you've never heard of PewDiePie then you'll only know him in the game as the narrator. He's not PewDiePie in the game, he's just the first-time user experience guy explaining how to play the game, you don’t need to know who he is.

“It’s the same with Legend of the Brofist. The game is a good platformer, people are still playing it three years after its release. Players are picking it up that might have avoided it because it had PewDiePie's name on it and they're really enjoying it.”