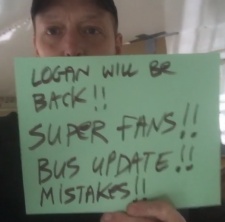 It seems Logan Paul's break from YouTube may be shorter than expected.

"LOGAN WILL BE BACK!" he wrote. "SUPER FANS!! BUS UPDATES!

"Face it folks....... we all fuck up at one time or another. That’s life!! What we do with those mistakes, bad judgement or whatever term you give it , is what matters. I love my boys and I am sooo proud of them"

"The haters will never ever have an effect on the Paul family." He then says in the video.

Paul uploaded a vlog last week in which he visited the Aokigahara forest in Japan, a notorious hotspot for suicide. He proceeds to then film a deceased man and include the footage in the final video.

The YouTube community spoke out in force against Paul's decision to upload the video. Paul announced last week that he would be "taking a break" from YouTube to "reflect".

That video has since been deleted, however attention has been drawn to Logan's other vlogs in Japan, in which he appears to upset and harass a number of Japanese people.

Paul is yet to make a statement about his return to YouTube.